Pop-Up at South by San José 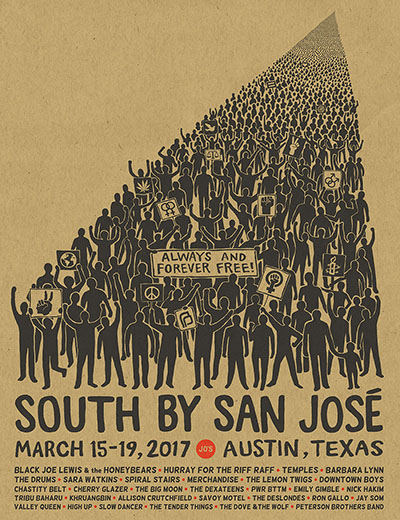 I’m taking a break from Flatstock this year at SXSW, and instead will have a pop-up store at the Hotel San José on Friday 17th & 18th March, in the courtyard lounge 2-8pm. There will be a huge party at Jo’s parking lot nextdoor, with lots of great bands for free. Come and escape the crowds, drink a frosé and shop for some posters and awesome vintage t-shirts from Filthmart who will be vending alongside me. 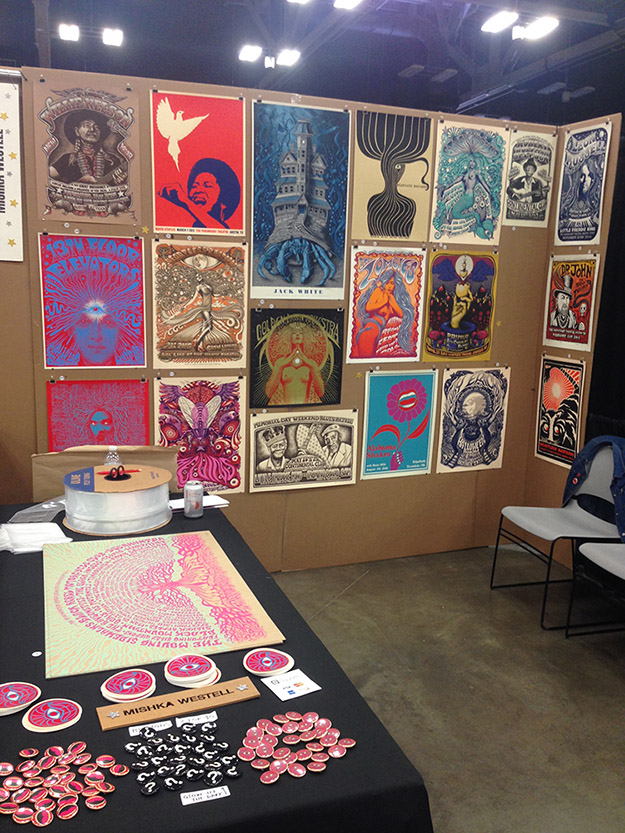 I’m exhibiting at Flatstock again this year at the Austin Convention Center, there will be buttons and stickers and a few previously unavailable posters. 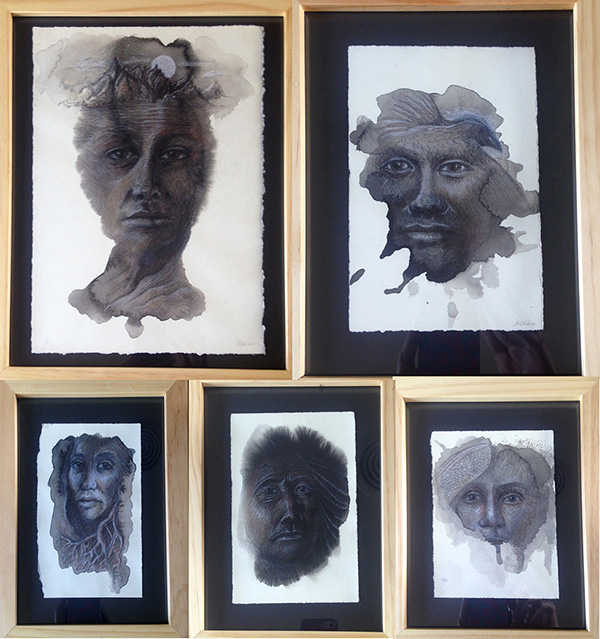 Another chance to participate in an exhibition at the Mondo Gallery! ‘House Party’ was a group show of original art with fantastic artists from all over the world taking part – the only thing linking the pieces is that they are all for sale at only $200.

Seeing as they didn’t have to be reproduced I took the opportunity to use ink and charcoal and chalk – media I haven’t had a chance to work in for a while. Some of the drawings are now available for sale on the Mondo website here

Poster for Richard Linklater exhibition at the Mondo Gallery 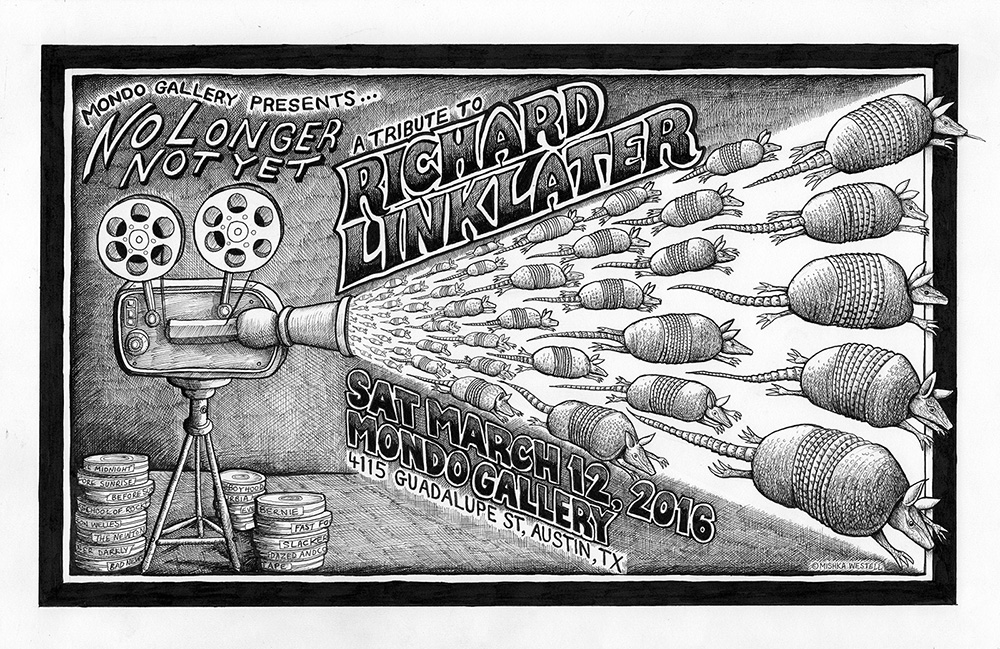 I was asked to create a fun image to celebrate the films of legendary film maker Richard Linklater, to promote an exhibition of posters illustrating his past work at the Mondo Gallery in Austin. I channeled the vibe of the original Austin Armadillo artists to come up with this dedication which Mr Linklater deemed appropriate. 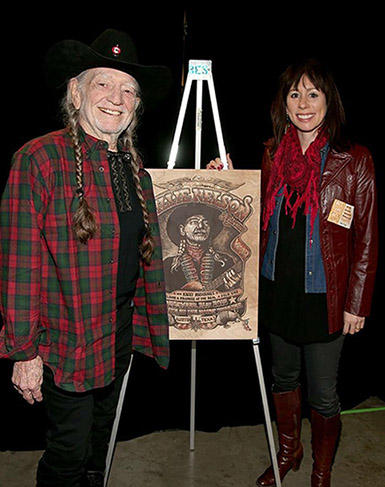 Not only did I get the opportunity to design a poster for the legendary Willie Nelson for his show on New Year’s Eve at the ACL Moody Theater, but I got to present him with a wooden version in person! 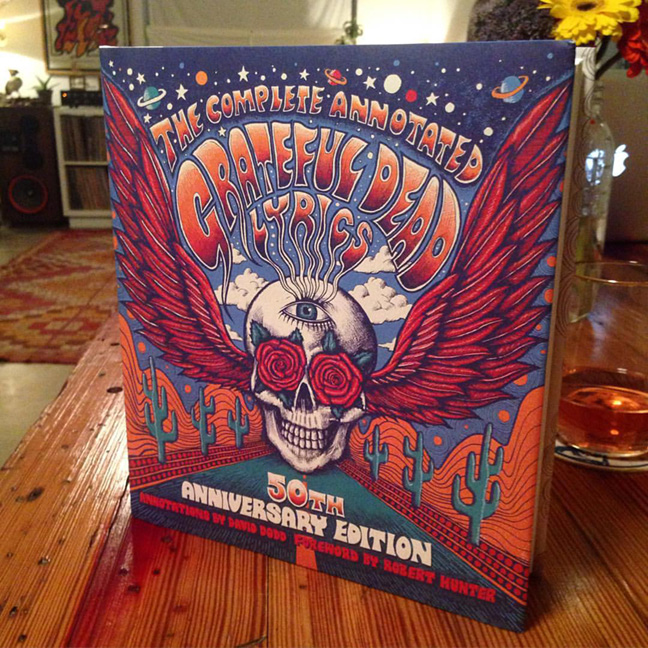 This summer I got to illustrate the cover for this cool book about the Grateful Dead. It is now printed and on the shelves of all good bookstores and online. LOVED drawing this, hopefully not to late to do some more for them in the future…

Solo Exhibition at the South Austin Museum of Popular Culture 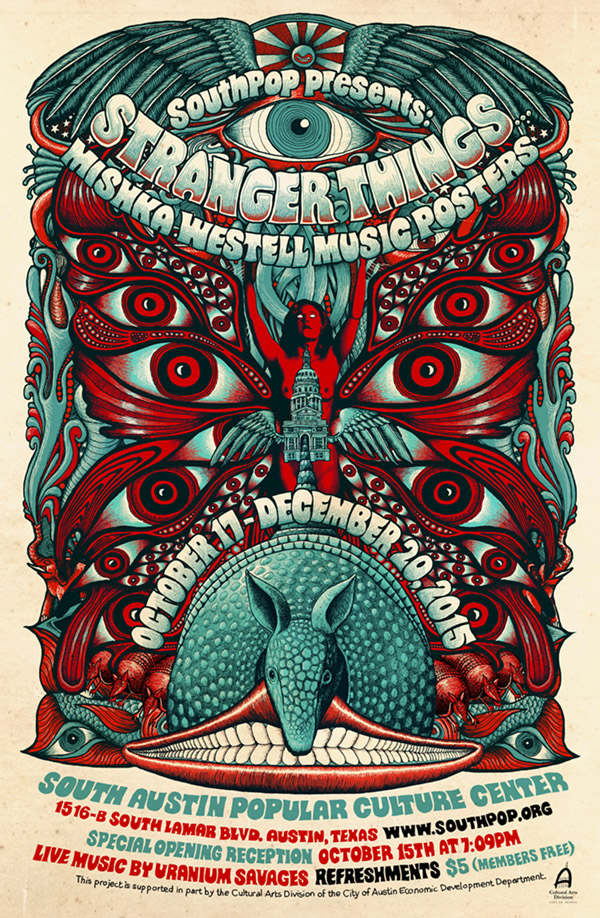 Last month saw the opening of my solo exhibition at the South Austin Museum of Popular Culture. It was an incredible honour to have my work displayed up amongst the art of all my poster artist heroes, and have some of them attend the opening! Thanks to Leea Mechling for organizing the show and all her hard work, and to everyone who came out to the party. The Uranium Savages entertained all with their craziness. Thanks to Kerry Awn, Scott Conn and Ed Gibson for these photos.
The exhibition runs until 20th December on South Lamar.

‘When Austin Got Weird’ at the Bob Bullock Museum 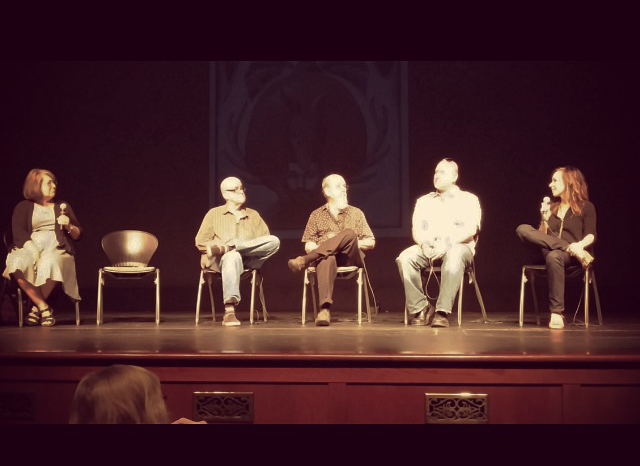 It was an enormous honour to be asked to be part of a panel discussion for the ‘When Austin Got Weird’ exhibition at Austin’s Bob Bullock Museum.

Leea from the South Austin Museum of Popular Culture interviewed myself, fellow local artist Billy Perkins and legendary artists from the 70’s Jim Franklin & Guy Juke (Michael Priest was a no-show unfortunately) in what was a fascinating insight into their process at the time and their view of poster art as a changing medium.

I also designed a commemorative poster that was used to demo the screen printing process. It features an old picture of Armadillo artist Jim Franklin wearing his ‘armadillo crown’ which he made to wear when announcing the live acts. The panel audience were able to pull themselves, even Jim Franklin had a go! 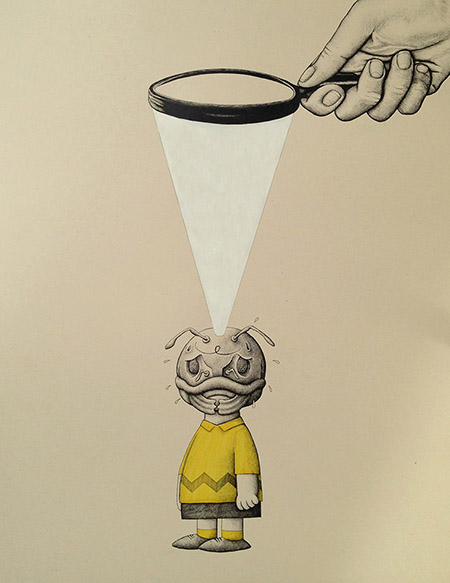 Rob Jones, a legend in his own lunchtime, for some reason asked me to collaborate with him on a piece for his new exhibition at Galerie F in Chicago. It’s a wonderfully twisted series of self portraits based on the Charlie Brown & Peanuts characters. Other collaborators are such great illustrators as Ken Taylor & Aaron Horkey & Jay Shaw who I am flattered to be hung on the same wall as. You can see the whole collection and also purchase prints here: 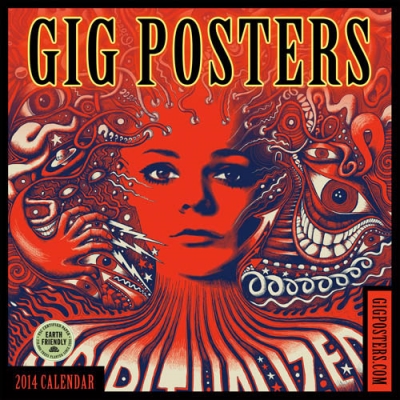 My print for Spiritualized at the Wiltern was chosen to be the cover image for the 2014 Gigposters calendar. I’m honored to even be part of such a great collection of images from the best artists in gig poster design. They are available to purchase online now: www.gigposters.com/calendar/ 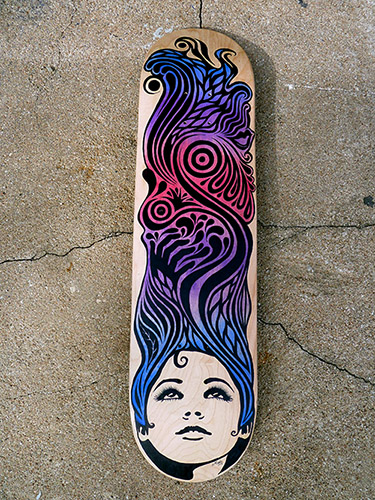 This week I contributed one of 50 designs for the Project Loops 50/50 initiative to raise money to construct a skate park in Taylor, Texas. Amazing artists from all over the US have created custom decks which will be auctioned off on November 22nd. They were exhibited at last weeks FunFunFun  Fest and are currently on display in downtown Austin as part of the F1 events.
http://www.projectloop.tv/5050 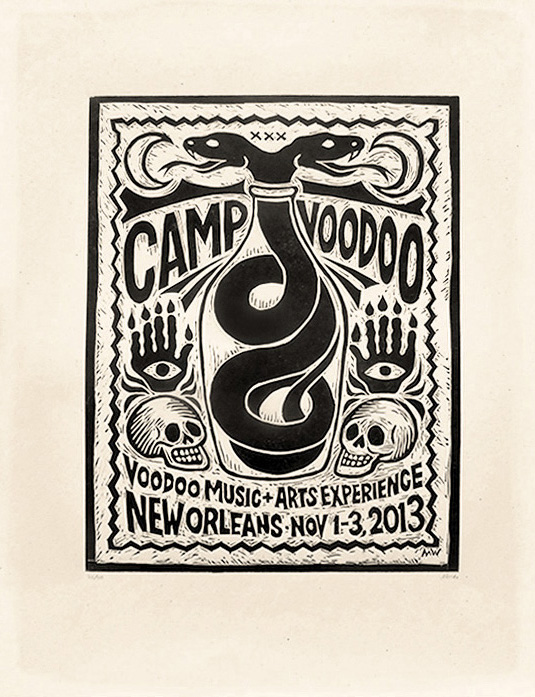 This was another fun collaboration with Design Build Adventure. I made these large linoleum block prints as limited edition special gifts for the VIP campers at this years Voodoo Festival in New Orleans. We cranked out 100 of them on the old press onto lovely hand torn French Speckletone paper.
I will put a few extra up in my store later this week.

Winter in the Blood movie poster 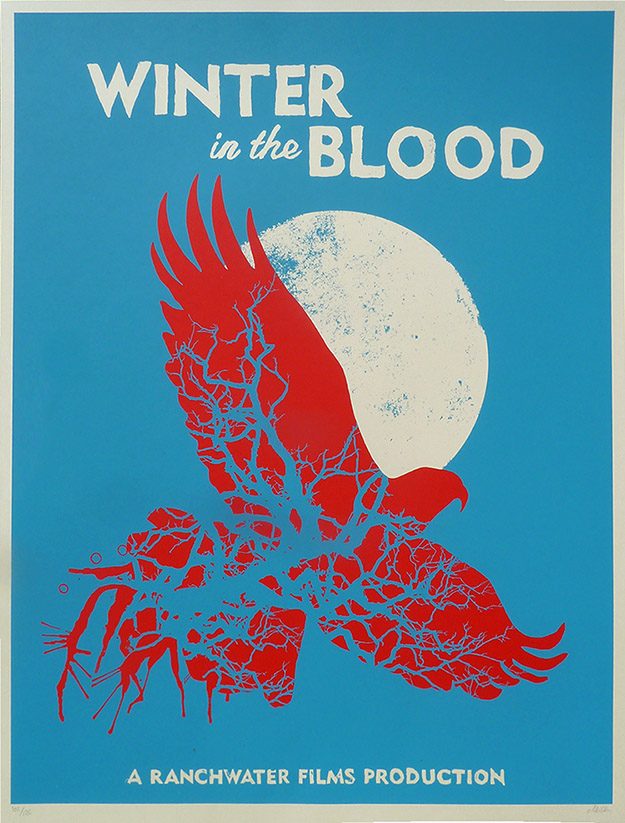 The magnificent movie ‘Winter in the Blood’ premieres this weekend at Austin Film Festival. I designed the opening credits for it, using montages of ink drawings which depicted significant objects from the film, together with hand painted text.
I also created this commemorative 18 x 24″ print.
Watch the trailer and buy the print here:
www.winterinthebloodfilm.com 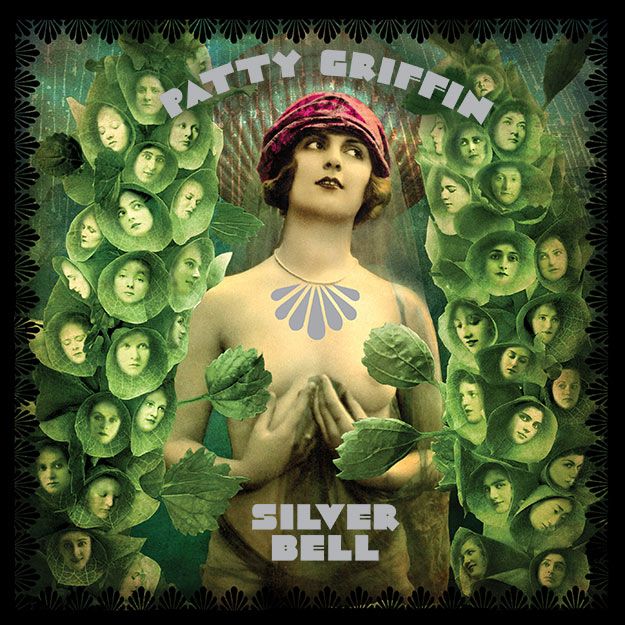 Patty Griffin’s new LP was released today to rave reviews, and I was excited to create the art for another fantastic recording.
It’s available on both CD and vinyl, check her website for more info:
www.pattygriffin.com 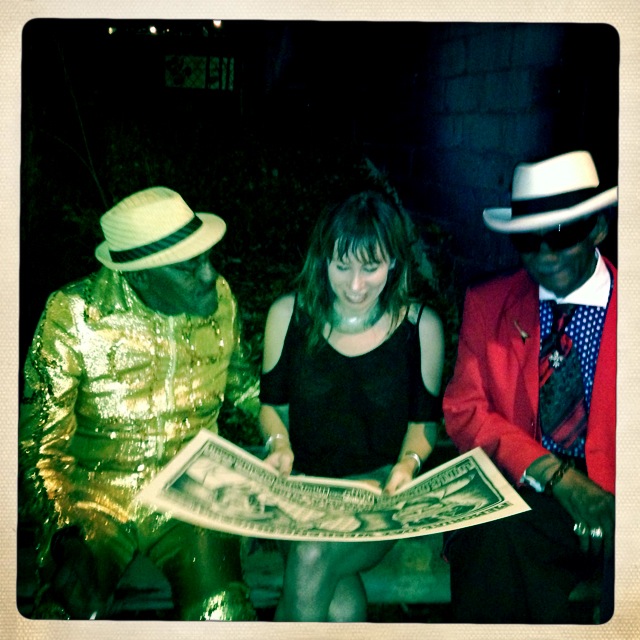 These amazingly dressed charters are Ironing Board Sam & Little Freddie King who I am happy to report loved my poster for their show at the Continental Club. 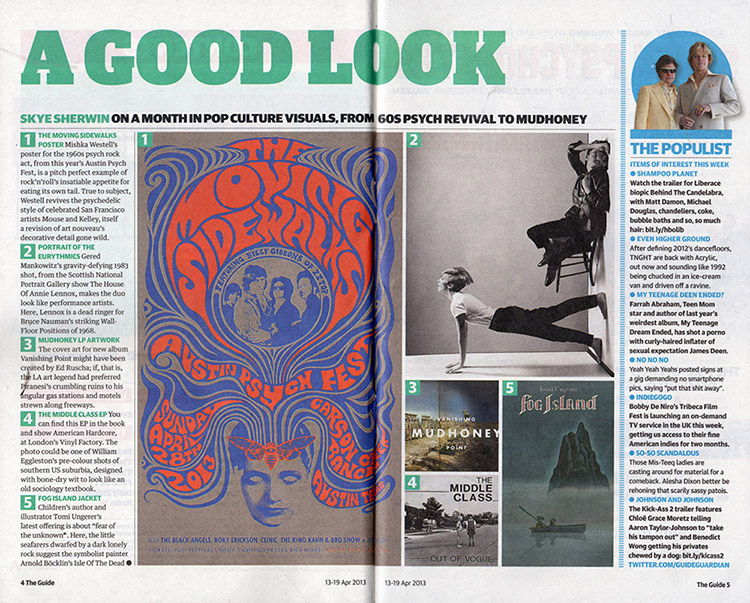 The print I designed for The Moving Sidewalks, (Billy Gibbons of  ZZ Top’s 60’s psychedelic band) for their performance at this year’s Psych Fest, was picked up by my favourite British newspaper The Guardian, to be the focus of their report on best new design from around the world. Thanks to my english friends for letting me know!